In the spirit of continuing the tradition of the Newport Folk Festival and the Deer Tick & Friends After Parties this year, please join us for a drive-in screening of Deer Tick and some very special guests performing a once in a lifetime concert pre-recorded at Fort Adams. Before the film, we will have an in-person Q&A and performance from Deer Tick’s Ian O’Neil and Christopher Ryan live on stage at the Misquamicut Drive-In. The film includes guests Leon Bridges, Robert Ellis, Sharon Van Etten, The Tallest Man On Earth, and Courtney Marie Andrews.

Deer Tick & Friends In-Your-Car-Party Live from The Drive-In is a benefit for the Newport Festivals Foundation.

This event is part of The United Theatre and Knickerbocker Music Center 2020 Summer Music Series presented in partnership with the Misquamicut Business Association. ONE TICKET PER CARLOAD. Music, Q&A, and film will be played via speakers and will also be broadcast to cars via FM transmitter.

Rules are in place per the State during the COVID-19 situation. Social distancing will be in effect. Cars will be parked 6 feet apart. You can sit outside the car with a mask.

Tickets must be purchased through Eventbrite in advance. No cash sales and no sales at the gate. Tickets are non-refundable.

One ticket for $75 gets your car in the lot. It does not matter how many people are in your vehicle, it is still only $75 per carload – vehicles that don’t fit in a parking space (such as campers) will not be allowed entry. Parking spots are first come first served as far as which lot and positioning of the car in the lot. You will not be allowed to move your vehicle to another spot. Your view of the stage will be dependent on your location and the number of large vehicles in the lot. Please bring your smallest vehicle so that everyone will be able to see the stage.

One person or family allowed at a time in the restrooms. 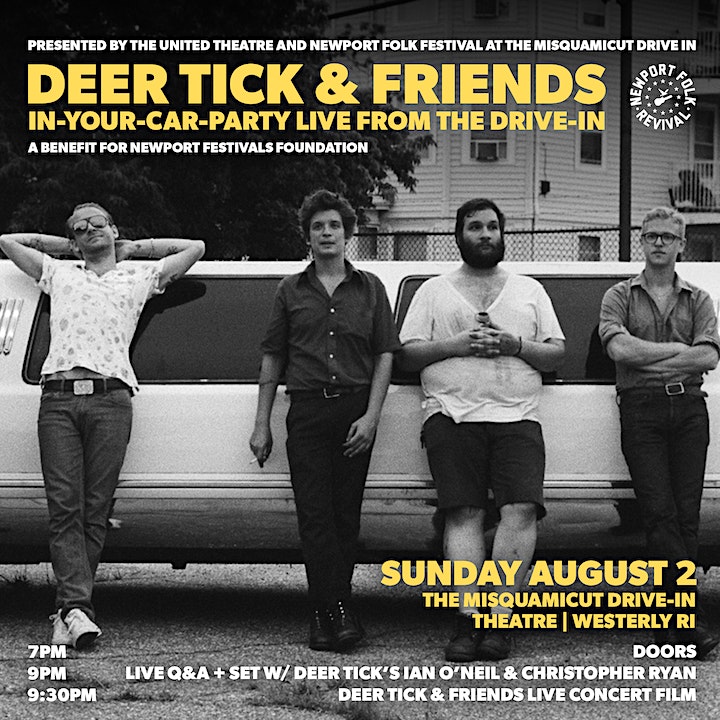 Jaws at the Misquamicut Drive-In-Season Opener!